What is the deal with the readings of 栅 (柵) and how do they appear?

According to modern dictionaries (such as the 漢語大字典 2nd Ed.), there are three readings for 栅?

Even if we abandon cè as an idiosyncratic toponymic development, the two main readins are still bewildering. How did zhà appear? Why did shān persist in one unique word, "grid"? And why even shān does not match in tone with the Middle Chinese predecessor? Are modern zhà and shān even the same word as was recorded in the Guangyun, or are they some totally new words that were just attached to the old character 栅 just through the reason of similar meaning?

For 栅极 (as well as related terms like 光栅 grating), the change of tone from an expected shàn to shān in Mainland Standard Mandarin is easily explained by 看边读边. As a literary, and indeed a technical word, 栅极 was most commonly encountered in written form, and if we compare the frequency of the pronunciations of all the other characters with 删 [abbreviated to 冊] as a phonetic on the right, this 看边读边 becomes clear.

Note that the official 台灣國語 Taiwanese Mandarin pronunciation of 柵極 uses zhà instead, and shàn (with fourth tone) is kept as the (regularly-derived!) literary pronunciation, but in practice never used. Cantonese on the other hand uses saan1, the regular equivalent to Mainland Mandarin shān.

Interestingly enough, there is an attestation of 柵極 in a 1930 issue of the periodical 《東方雜誌》 where it is unambiguously in 白話文/國語 but referring to electrical grids.

The Mandarin reading cè is more-or-less directly imported from Cantonese caak3, as those placenames are in Guangdong. Note that the regular derivation of Middle Chinese 楚革切 would be cak1 in Cantonese; caak3 appears to be a colloquial version (compare 惜 sek3 colloquial vs sik1 literary) that is used. When imported back into Mandarin, one can only assume phonetic similarity; even so, the resulting phoneme cè is fairly close to the theoretical regular reflex in Mandarin che. Nevertheless, in other cases, the caak3 reading in Cantonese is functionally equivalent to the zhà reading of Mainland Mandarin.

So, where did the zhà reading come from then? According to a short 2020 article from 语言文字周报 by 楼启明, it is a 19th-century colloquialism. The 《增廣字學舉隅》 from 1874 states (bold mine):

Even in Thomas Wade's 1867 《語言自邇集》 A progressive course designed to assist the student of colloquial Chinese, as well as having the regularly-derived pronunciation shàn (page 100 of the "Peking Syllabary section), but also zhá (on page 31): 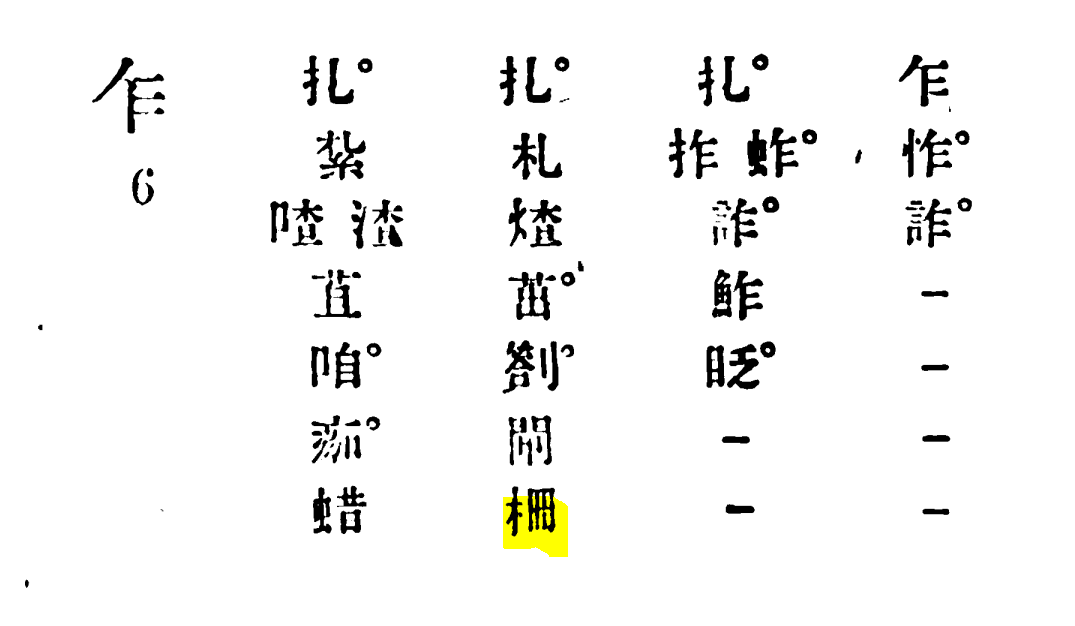 According to 楼启明's analysis, the colloquial pronunciation zhà is actually under the influence of 折 > 闸 ~ 乍. The tonal uncertainty is characteristic of many 入声 "checked tone" phonemes in the Beijing dialect.

Additionally, an explanation for the shi of 大柵欄 and shā in Beijing dialect is posited, from Manchu "沙拉" meaning coral/treasure (though when I look it up here I get ᠰᡠᡵᡠ suru).

Not the answer you're looking for? Browse other questions tagged mandarin characters pronunciation topolect reading or ask your own question.

4
Chinese Languages With Multi-syllabic Readings Of Single Characters
4
How many Chinese characters have multiple readings/pronunciations in Mandarin?
2
Are there readings exclusive used only for people name?
1
What is the difference between colloquial and literary readings of characters?
11
Questions on a Hakka song and its particular Hakka dialect
5
How are "vernacular" and "literary" readings of characters chosen and used outside of Mandarin?
5
Using 反切 to determine readings of characters in modern varieties of Chinese
4
Question about third tone sandhi in two specific cases
0
How salient is the graphic similarity of 戲, 謔, 虐 to readers?