This is from the Standard Course Book of HSK5, chapter 18.

I don't understand the meaning of 两两一组出现。

This is my literal translation:

As you can see, the 两两一组出现 is not clear. How to make it make sense? Any help?

appear in sets of two (one after another)

孩子们根据年龄段被随机分成两两一组。
The children were randomly divided into pairs according to age group.

研究者设计了一个有趣的实验。
Researchers planned an interesting experiment.
志愿者的任务很简单，
The volunteers' task was simple,
每个人会看到两两一组出现的一些图画，
everybody would see pairs of pictures,
每组中一幅出自著名抽象艺术家之手，
one of which would be from a famous abstract artist,

This is the definitions given by Chinese Zero to Hero (paid). Video: 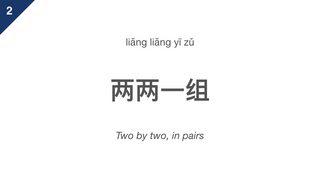 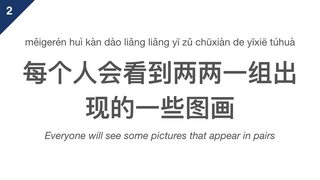 每个人会看到两两一组出现的一些图画。
Everyone will see some pictures that come in pairs.

And their pdf translation:

Researchers have designed an interesting experiment. The volunteers’ task was simple, each of them would see pictures appearing in groups of two, one of each group came from the hands of a famous abstract artist, another would be a graffiti from a amateur, a baby, a chimpanzee or an elephant. Volunteers must decide which picture they liked better in each group.

So putting together 两两 = "in pairs", 一组 = "a group", and 出现 = "to appear", we get the above "appearing in groups of two". So they show the participants two images, and they choose the best one, then they show another two. (It reminds me of experiments like What Is The Best Thing? by Tom Scott.)

Be aware that the HSK texts are sometimes derived from original texts. In this case, it comes from:

The part in bold translates to something like "everyone will see a few groups of pictures appearing in pairs".

Everyone would see the pictures that are shown two by two. (in groups of two, in pairs).

This is very interesting. We could have the exact "word-by-word" translation for this grammar phenomenon of Chinese to English. See examples.

他们一一发言．They give speeches one by one.

他们两两跳舞. They are dancing two by two.