For e.g., what is spelled "u" sometimes is pronounced "ü". Other times, I think the final "i" sounds differently when combined with different initials.

However, the spellings of the finals do change when used after different initials. The details can be found in 汉语拼音方案 (the Scheme for the Chinese Phonetic Alphabet), which is the official standard for Chinese pinyin.

NOTE2: I don't know whether the full detail of the scheme is appropriate for beginners. There are two links in Chinese: 汉典 BaiduBaike

'U' is pronounced 'Ü' with the initials J, Q, X and the pseudo-initial 'Y'. Otherwise it is always pronounced 'U'.

Some pinyin charts can help you remember it by visualization. On the chart below you'll see the 'Ü' pronunciation is grouped regardless of how it is written ('Ü' or not) 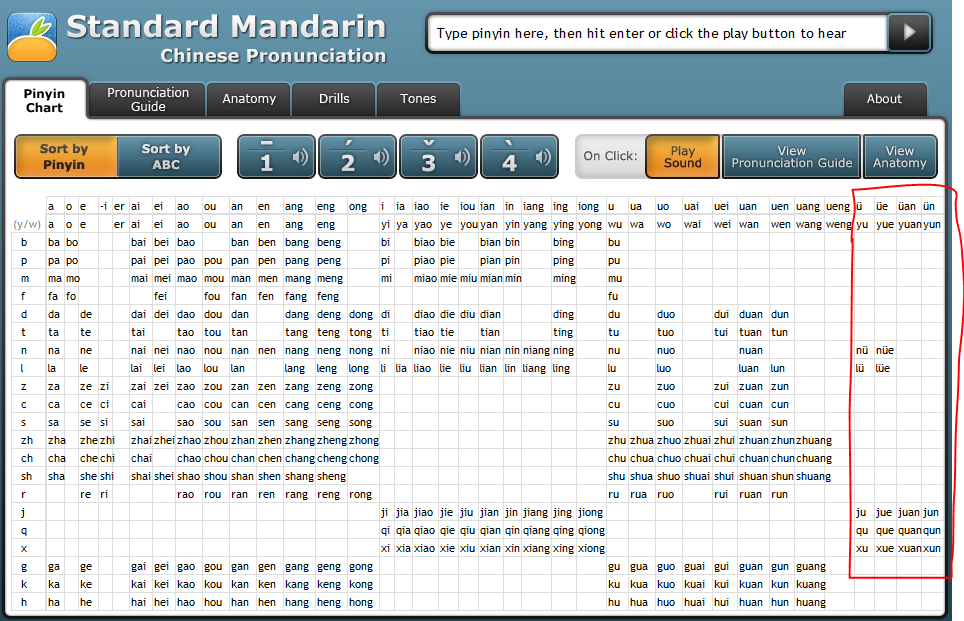 Now I do not agree to the o. Or rather, it needs specifications. o by itself is, AFAIK, only present in the 4 characters 哦喔噢嚄, which are interjections and exclamative particles, and which I would pronounce /o/ – I'm not a native though, so this must be taken cum grano salis, and they are sometimes rendered as /wo/. When o is a syllable final (e.g. bo po mo fo, actually those are the only examples, as elsewhere you find uo) it is usually pronounced /wo/. Wikipedia has this table and note three in this one agreeing with this view. Also, this Wiktionary entry, for example, translates -o to /-u̯o/, which is essentially /-wo/. With this, I think the 7+3+5 rule is a good mnemonic for these spelling-sound discrepancies.

There is also another thing: tone sandhi (Chinese 连续变调). Basically, third tones often change. Base rule: 3+3 -> 2+3, i.e. nǐhǎo is pronounced níhǎo. For sequences, see here and linked questions. There are also tone variations of 一 and 不, which are sometimes marked, but often not marked. For those, if you are not satisfied with this, I suggest you ask another question.

6
What happens with tone sandhi with consecutive third tones, e.g. wo3 hen3 hao3?
0
Pronunciation of 对 and 水

6
Strange pronunciations in Hakka song
8
Rhyming in modern Mandarin
8
Are the two pronunciations of 谁 (shéi / shuí) the result of regional differences?
1
Questions about the Taiwanese mandarin accent
3
質: when to pronounce in 2nd tone or 4th (Mandarin)?
4
Question about third tone sandhi in two specific cases
2
When is f not pronounced?
0
How to pronounce 學 "shwehh", "shoo-ehh", or "xüüehh"?
3
According to the official rules of pinyin, should 道德经 be transcribed with or without spaces between the individual syllables?
0
Is the Ong sound absent from zhuyin?