四航奋进: This ship's name is translated as "Four Aircraft Endeavour", but is it?

The name of the ship below is given as: 四航奋进

I've seen it previously*** translated as "Four Aircraft Endeavour", which seems peculiar, as it's not an aircraft.

The 四 I can understand: it has two pairs of two cranes, so four cranes in total. Are those the four endeavours? Isn't 航 boat? So I can see how the component syllables could conceivably form "Four Endeavours Boat" - but is that a valid translation? Are there implications, idioms, or subtexts in the name 四航奋进?

I'll also note that in English, some speakers get quite passionate about distinguishing between "boat", "ship" and "vessel", though I don't really understand the nuances, but if there are nuances in this name, I'd appreciate pointers to them 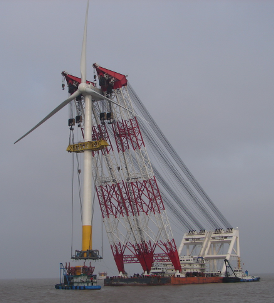 ***(note: subsequent to this post, the linked page at the top has updated the translated name to "Fourth Harbour Endeavour", thanks to the answers here)

This is a typical example of Chinese English. 「四航」is the company or institution who built the ship. It has nothing to do with the ship's structure. I read 「四」 in 「四航」 as fourth. There might or might not be 「一航」 or 「二航」. Here's the official website for 「四航」. 「四航」 is short for 「第四航务工程局」， it's a company mainly engaged in construction of a variety of infrastructures like ports, bridges, hydraulic works and etc. according to the about page. They call themselves Fourth Harbour Engineering in English.

"Four Aircraft Endeavour" is a confusing translation. Literally, 「四航」 is "Fourth Harbour" and「奋进」 is Endeavour in this context, although I'm not sure whether Endeavour is a good translation. I would probably translate 「奋进」 as striving forward but it doesn't sound like a name.

航 can be translated in a number of various ways, and its meaning commonly involves transport by air or space in the right context or word (consider 航空, 航天, 民航, etc). In some cases the same word can even apply to both sea and air transport (航班, 航线, 航模) But in this case I agree that "aircraft" is just a bad translation. It was probably produced by a computer or a non-English speaker.

Not the answer you're looking for? Browse other questions tagged meaning meaning-in-context names or ask your own question.

4
How should this painting's title, signature and yin (chop) be correctly translated?
0
Birth name question
7
Where does the middle name go in a name that has been translated into Chinese?
3
Does 飛機 mean "airplane" or "aircraft"?
2
Adopting an appropriate Chinese name
0
What does this name mean in pinyin/english?