"A pair of mandarin oranges" as a homophone of "the gold" 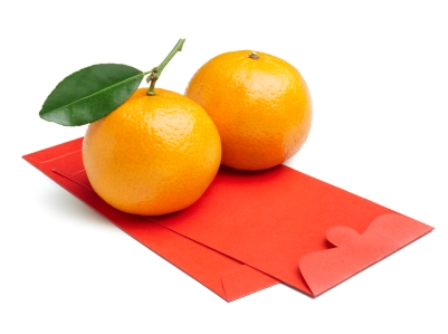 Today, when Chinese people celebrate the New Year, there's a tradition to offer each other Mandarin oranges. As many sources say, the Mandarin oranges should be offered in pairs, since the phrase "a pair of Mandarin oranges" is a homophone to "the gold".

Some sources say that 柑 [gan1] is a homophone (or close) to Cantonese 金 [gam1], which does not sound very convincing for me.

So I suppose there's some older/dialectal pronunciation of one of these phrases (or both) that makes a closer match.

So the question is: What are the exact words of the phrase "a pair of Mandarin oranges" which form a homophone to "the gold"?

Actually 金 and 柑 are both pronounced gam1 in Cantonese, according to Rita Mei-Wah Choy’s ‘Read and Write Chinese’.

While it may be better to refer to Shantou as Chaozhou (潮州), I think CA55CE37 is onto something here. Indeed, in chaozhouhua 大橘/桔 (orange) and 大吉 (great luck) are apparently near homophones. A Thai source I have mentions this as well and asserts that oranges are given out at weddings for this reason. In Thailand, people from the Chaozhou region are dominant in the Chinese community, as you probably know. And oranges are given for the New Year holiday too (we live in Bangkok and received two oranges from our Thai-Chinese neighbors just yesterday, as it happens.) It may be simply that two is an even number and thus auspicious.

So, there are various words for orange/tangerine (there is also 橙) and various rationalizations for giving people fruit during holidays, depending on local dialect and local tradition. I wouldn’t be surprised to learn of more wordplay of this nature, for instance the link between pomelos and ‘to have’.

3
Mandarin equivalent of "stir crazy"
2
Is the cantonese expression 五福臨門 present in Mandarin too?
7
How did 东西 come to mean "something" in the expression "吃东西"?
3
How to express "same shit, different names" in Mandarin?
7
Is the expression 学识渊博 usually used in a pejorative sense?
2
What are the common phrases in sports when you win the score?
2
Is there an expression similar to the English "gut feeling" in Chinese?
1
"How's that sound?" in Mandarin
0
Does the distinction between speak and say have any equivalent in Mandarin?