Why were some letters like Q, X, C, chosen for Pinyin which confuse non-Chinese speakers?

A romanization system is basically a system in which roman (latin) letters are used for languages that use non-roman scripts. This has the obvious benefit that people who can (maybe only) read roman letters (a great part of the world's population) will be able to read it. But people who don't know the language being romanized will pronounce roman letters as they pronounce them in their language or in a general common pronunciation shared by romance languages and english, mainly.

So I've heard people pronounce Chinese names wrong each and every time, when those names have letters like B, D, ZH, C, Q, X and G. This letters are obviously pronounced very different in Pinyin than in any other language, so why were they chosen?

I know that if one were to choose roman letters that sound like Chinese phonemes and not repeating those letters, the roman alphabet just isn't large enough for all Chinese phonemes, but anyway, a foreign speaker shouldn't need to distinguish Q from CH and ZH, especially if they were not to learn the language, but just to pronounce some Chinese names right.

What I think is, Pinyin is great for Chinese learners, who need to tell apart sounds like G & K; Q, CH & ZH; and SH & X, but for foreign readers, a simplified Pinyin should be used.
So if someone who doesn't know chinese, reads "qing xin", they would pronounce "king ksin", but rather, if it was written "ching shin" they would read it right, at least the best way a non-Chinese speaker can.

TL;DR: Sorry for the long post, but the question would be, do you know why this foreigner-confusing letters as Q, X and C were chosen for Pinyin instead of making it more readable for non-chinese speakers?

Edit:
This would be a Relaxed Pinyin which would just allow a better pronunciation of Chinese names for people that don't know Pinyin:

Of course, you can't go back from this to Pinyin because some letters represent more than one Piyin letter.

So, for example, the Pinyin qīng xiāo which would be incorrectly pronounced by someone who doesn't know Pinyin, would be written ching shiao in a Relaxed Pinyin, which would allow them to pronunce Chinese in the most possibly correct way they could, without having to learn anything they don't already know.

I have never found a reasoning on how Pinyin was created, but as Alenanno says, there have been predecessors and people working on the Pinyin standard already had some experience with existing systems. Some sounds can probably be mapped to similar IPA notation, while others seem totally off.

From my own reasoning I'd say there are at least two arguments that may speak for the possibly awkward choice of letters:

There are, by the way, academic studies on how Pinyin "letter mismatch" complicates the acquisition of Mandarin for western speakers. I'll look for them if you want more details.

Pinyin, like other written systems, is an arbitrary system, and the corresponding sounds were expressly decided. It seems it was based on preexisting systems: Gwoyeu Romatzyh of 1928, Latinxua Sin Wenz of 1931, and the diacritic markings from Zhuyin (also known as Bopomofo).

But the same problem you highlight in your question happens when learning any other language. For example, I'm Italian and when learning English I had to learn that:

So why pinyin with Chinese should be different? A certain system has been decided, all that is left to do is for you to learn that system and learn to distinguish the sounds described in Pinyin from those in your language.

I think the "confusion" is for anyone that decides to learn Chinese (and therefore, Pinyin) regardless of your mother tongue (if not from asian countries): some sounds correspond to a certain language, others to another language and so on, so everyone has some advantage. The sounds that really differ are a few, and you have the same chance of finding them when learning other languages too.

Pinyin was designed primarily as a writing system for Chinese speakers to use, and to help children who speak other dialects to learn Mandarin. As such, making it easy for foreigners was not a particular priority.

In any case, different languages use the Roman letters differently, so what would be obvious choice? For example, in different languages J can pronounced like in the English words lo*ch* (Spanish), plea*s*ure (French), or *y*es (German and many other languages this side of Europe).

At least with Pinyin you can learn how to pronounce it properly, unlike Wade-Giles which, since it is almost never used correctly, leaves even proficient speakers making wild guesses.

I vaguely remember reading that Pinyin was developed originally to teach Chinese to Russians, so some of the sounds are based on Russian sounds. I'm not sure how the Latin and Cyrillic alphabets were mapped.

From a brief browse through Wikipedia articles on Pinyin and Sin Wenz the Russian connection sounds reasonable, but I can't find any details to confirm my memory. I suspect I originally read about it in either The Man Who Loved China, or one of Peter Hessler's books.

Pinyin inherits many of its orthographic choices from earlier romanisations of Chinese, namely the Gwoyeu Romatzyh, Latinxua Sin Wenz (and zhuyin for diacritics).

The b/p, d/t, g/k distinction for aspirated/unaspirated consonants is inherited from this, and was likely chosen by analogy to them being voiced/unvoiced.1

The other less intuitive choices are mostly for the sibilants, many of which do not have analogues in English and hence were likely inspired by other latin-script languages:

Your relaxed pinyin is roughly analogous to an earlier romanisation with English-speakers in mind - Wade-Giles: 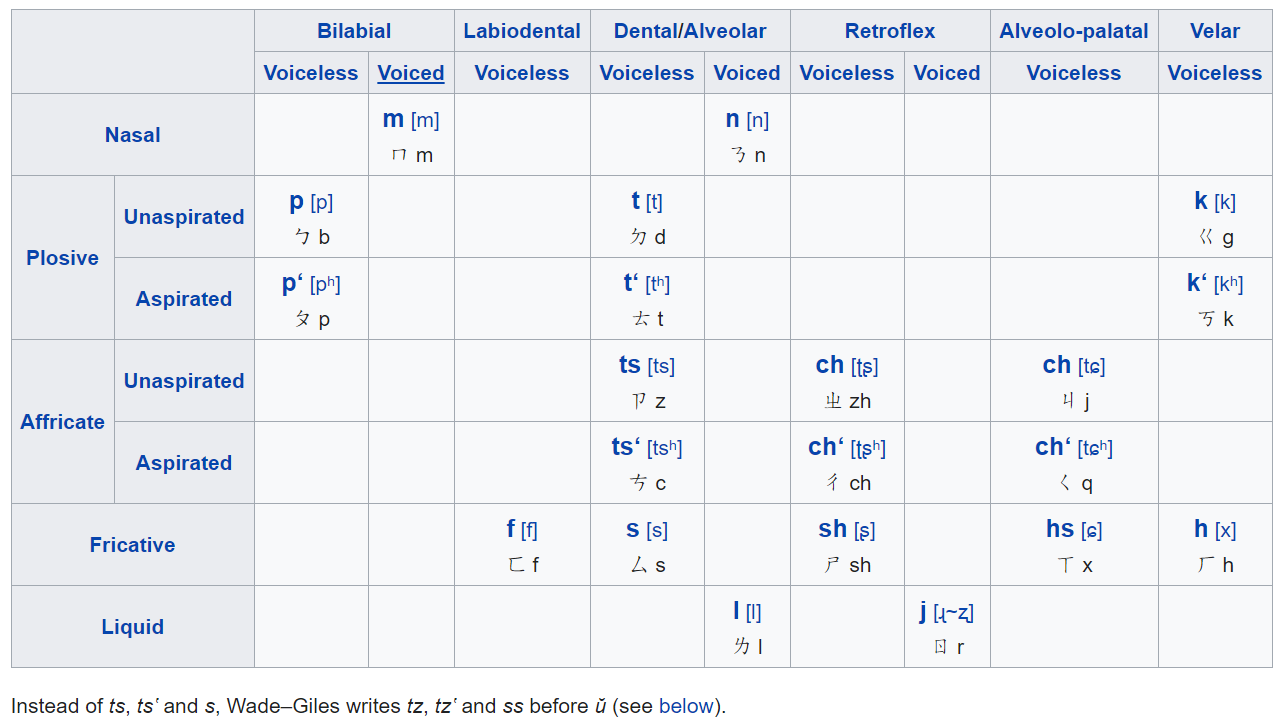 The international phonetic alphabet would have been a great tool. I understand petruza's frustration completely. Names like Zhuang, Zhang, Zhou and Qing to name a few are almost always mispronounced. Tones and accents are not the problem, the accuracy of consonants needs to be brought in.

"X" is not pronounced like "sh" but much closer to "s" but slightly softer. "Xiexie", if pronounced correctly, should be close to "sear sear" not "shear shear" in American English (without the audible "r" at the end). "星(xing)" sounds almost the same as "sing".

Of course, there is a standard Chinese pronunciation as known as Beijing accent. But the pronunciation of a word can be very different.
Pinyin is created in order to popularize a kind of standard pronunciation. The reason why Pinyin using English character is just because it is convenient.There is some related point between pinyin pronunciation and English character, but I think you should ignore it.
If you look up the history of Pinyin in wikipedia,you can get more information.

Not the answer you're looking for? Browse other questions tagged pinyin romanization or ask your own question.

1
The origin of pinyin
17
Why is it written LIU in Pinyin, when there's clearly an O sound?
7
b and p, d and t, k and g etc. in English and Cantonese

4
Did phonological systems (namely bopomofo) standardize Chinese phonemes?
1
Missionary Romanization?
6
Should names in idiomatic expressions be capitalised?
4
Braille and Chinese Input
1
Why would the name of the 慈祐宮 temple in Taipei sometimes be written "Cinyou" instead of "Ciyou"?
0
Looking for Pinyin/Traditional Characters eBooks
1
Are there any pre-modern/non-romanization examples of attempts to alphabetize Chinese?
1
Asking Chinese mother-in-law to learn pinyin?
4
Why -ian instead of -ien and -üan instead of -üen?