The traditional Chinese characters seem aesthetically more beautiful, but I think they are harder to write (requiring more attention, and more time to fully write them, I suppose...). 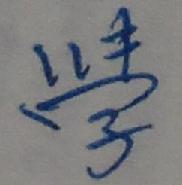 They can understand and will occasionally use simplified Chinese

Personally, having gone through grade school with Simplified Chinese makes you appreciate Traditional Chinese because the simplification of words sometimes makes no sense until you see the original Traditional writings. Eg. 愛 (Traditional) has the word 心 (Heart) in it versus 爱 (Simplified) which removes the heart.

The older generation would be better with Traditional because that's what they learned growing up. The younger generation probably love simpler things so Simplified would be the way to go.

If you are interested in the debate between both : https://en.wikipedia.org/wiki/Debate_on_traditional_and_simplified_Chinese_characters

Not the answer you're looking for? Browse other questions tagged traditional-vs-simplified handwriting or ask your own question.

6
What are the relative literacy rates in for simplified and traditional characters?
3
Issues with machine translation from Traditional to Simplified (not vice versa)
3
Did 劵 and 券 become variants in PRC/simplified in 1995?
4
How to learn to read Chinese calligraphic paintings (and Chinese handwriting)?
3
Is there a definitive list of countries that use traditional chinese and those that use simplified chinese?
5
Comparison of tools for converting traditional to simplified Chinese
13
What is the difference between 裡, 裏 and 里?
2
Is there a dictionary of standard character variants?
0
How many 行书 semi-cursive handwriting variants
3
Handwritten shape of 「舟」 when it appears like 「月」 and the component form of 「肉」