The following dialogue is in NPCR 2, Lesson 23, listening exercise 7 in the exercise book, and my attempt in translating it. 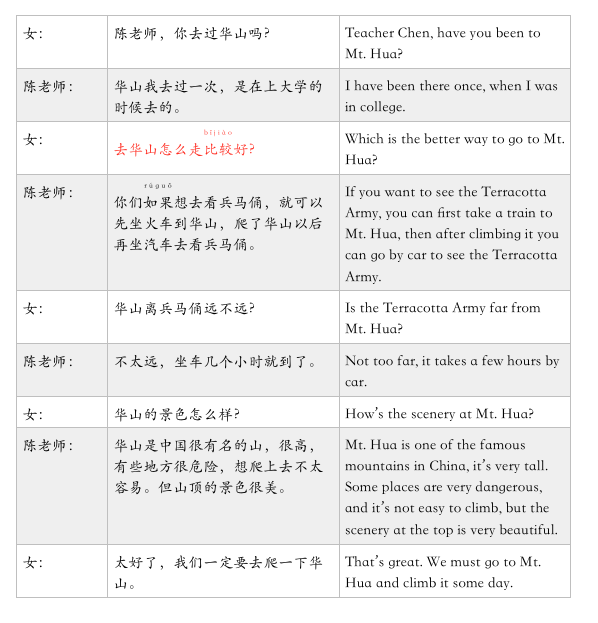 I'm unsure about the sentence marked in red. I have not learned the pattern 比较+adjective until now but my Chinese friend told me that it's the comparative form of the adjective, so in this case "good"->"better".

But I can't make sense of this question. It's better compared to what? I also see a 走 (to walk), but in the next sentence they talk about trains and climbing. So how should I translate it?

比较 here doesn't so much accentuate the comparison between two or more objects/methods. It more gives you an idea of something that has a quality to a somewhat significant degree or above the average. (So in some way, it is a comparison, but a comparison to an unreferenced standard/average).

It can be loosely translated into 'relatively', 'fairly', 'rather' or 'somewhat'.

Another example would be:

Mary is rather obese/overweight.

A literal English translation is, "To go to Mt. Hua, how does one go there comparatively well [better]?

What your Chinese friend said is right. 比较+adjective is a very common pattern used in Chinese which means 'beyond average' or 'beyond other competitors' according to one's knowledge or some theories and so on. So there do exist some comparative meanings.

I don't know the very reason why this expression makes sense, most of us Chinese don't. I think it appears as a brief way to say '...the best ... according to...'. The following sentence says exactly the same thing in Chinese

We also say in oral language

But 比较+adjective is the most commonly used pattern.

Supplement: Chinese has a tradition of modesty. We don't usually assert something is 'the best' unless it is the fact that we want to emphasize. When asked by your close friend '你最喜欢什么运动', you can say that

But when asked by an elder, we naturally would answer

The latter sounds softer and implicitly express your modesty.

8
How can I express 'having' in an intimate sense?
7
Is the expression 学识渊博 usually used in a pejorative sense?
0
(n.) 的大預言 having trouble making sense of this construct
0
Making sense of '推魏大肚'