What is the glyph origin of '奇'?

奇 ( jī | qí ) is a character that means strange but the glyph origin appears to have been lost. At least as far as I can tell after researching offline books, zhongwen.com, and zdict.net ( qí ). The character is composed of (dà) 大 and (kě) 可 but none of my references can explain why the meaning is "odd" (numerically) or "strange" (as in unusual).

This is just one of the characters that seem to have lost it's history. I know that I could just accept it's meaning and memorise it but I really appreciate the storied history behind each character as a method to discern meaning. Can someone share information on the etymology of the character 奇?

While researching this character I noticed that the Chinese dictionaries have much richer information available than the Chinese-English sources.

a lot of which is quite hard to decipher and contrasted with my Simplified Chinese English Dictionary below:

Zhongwen.com hints that this may just be a person exhaling in wonder (to imply strange??) but is that a stretch?

Zdict.net has a user forum (here) in which this character is discussed but I am afraid that I may have missed the gist of the conversation. So any help would be appreciated. The following reference image was shared in a post by user if that is any help. I am unsure of the original source and whether or not this is a composite.

The discussion on zdict basically explains that the Oracle bone script morphed (讹变) into its current form, but this transformation did not follow standard rules.

The original Oracle bone script shows a man riding a horse, which means "to ride" (i.e. what 骑 means today), but when small seal script was developed, the horse morphed into 可, which violates the usual practice of keeping the meanings the same. The character also acquired the meanings of "unusual" or "strange":

According to the 漢語大字典, which has a graphic of the character in various scripts, in some earlier versions the top element of 奇 is written as 立 ‘to stand’. It further cites an early analysis from the "六書故” (liushu being the theory of 6 types of character composition):

Karlgren’s Analytic Dictionary gives 踦 as meaning “one-legged, halt, lame; single.” In other words, “standing on one foot” is semantically linked to “strange, odd number,” and the character 奇 originally had both meanings. It’s also easy to see the “man with one leg” in 奇, if you are looking for ways to memorize this character.

Taking a different tack, both Karlgren and some of the early dictionaries state that 可 is also a phonetic element, although the correspondence is inexact.

The "oracle bone form" that the OP posted looks fake, and no paleography titles that I can find seem to support that「奇」was the original character of「騎」or that「可」originally represented a horse, and all say that the character just uses「大」as a semantic component and「可」as a phonetic component. This is believable from their Old Chinese Reconstructions: 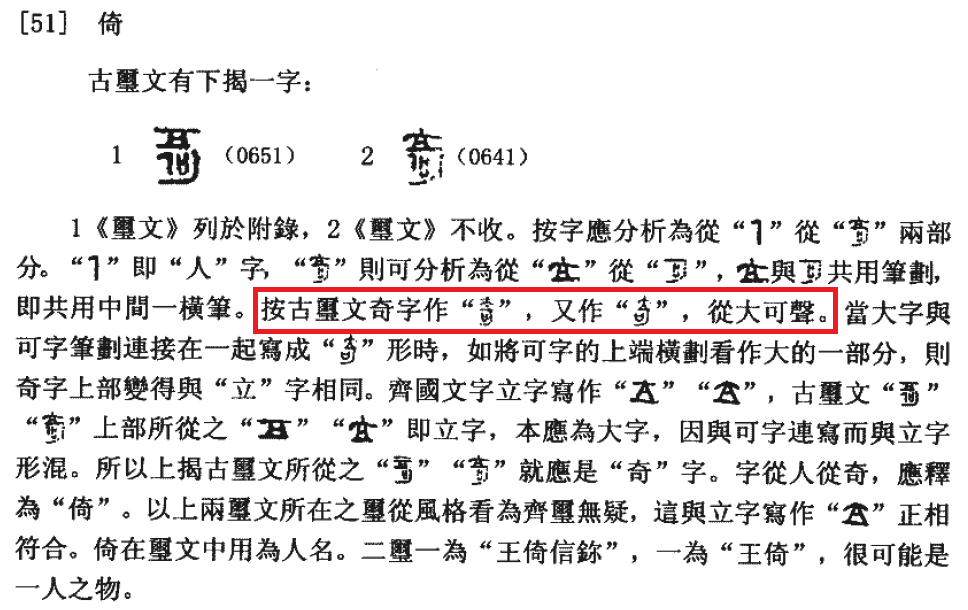 The structure of the character itself doesn't tell us too much about why it came to mean "strange".

The Zhongwen.com explanation has over-interpreted the character as a compound ideogram. "A person exhaling in wonder" plausibly interprets「大」as a person and 「可」as "to exhale", and note that「可」is viewed by some paleographers as a very ancient and possibly original character of「歌」, "to sing". However, this compound ideogram theory lacks evidence, as if「奇」indeed depicts a person exhaling in wonder, there would be textual examples of「奇」being used as a verb meaning "to exhale (whether or not in wonder)". The best thing to do is to wait on more evidence to be gathered rather than subject the character to wild interpretations.

Let me add a few points to congusbongus's very good answer. The most likely explanation is that 奇 originally meant ‘to ride’, but then it was borrowed to represent the word ‘unusual’, which had identical pronunciation. Later, in order to keep the two characters separate, the 馬 ‘horse’ radical was added to the character for ‘to ride’. This is the way the etymology of many characters is explained by Chen Zhiqun in her very interesting dissertation, Compound ideograph: a contested category in studies of the Chinese writing system (for a summary of Chen's main points, you can take a look at chapter 2 of my thesis: Why are Chinese characters so damn hard?)

So, in short, the character 奇 doesn't represent anything related to the meaning ‘unusual’. There are many cases of such phonetic loans. Consider 花. It means ‘flower’, that's why it has the grass radical. But it may also mean ‘to spend’. There is nothing in the components 花 that is related to the meaning ‘to spend’. The only relation is that the Mandarin word for ‘to spend’ is pronounced identically to the Mandarin word for ‘flower’, huā.

For your information, usage of a glyph went through many years of evolution. The original usage pf (奇 Ji) as number derive from I-ching, differentiate the number Ying(feminine, even number, divided by "pair" ) and Yang(Man, Odd, cannot be divided perfectly ) . 一者，奇也(The number "One", is special)。陽奇而隂偶 (yang is odd, and ying is even)

In fact, one is a special (odd/strange) number for most cultures when they start develop mathematics. For unknown reason, the early writer of I-ching successfully derive a binary multiplication from the number one. As we know today, any number power of 0, is 1 . And I-ching binary i.e.

Due to its special attributes, 1 is also known as 奇 , but only in I-ching. In modern mandarin, it is no longer mean one, but odd number.

（update) I just found a reference of the ancient 奇 glyph.

You have to take some of the old non-scientific etymology sources (like Shuowen) with a grain of salt sometimes, and certainly of forum sources.

It's not credible to me, for example, that the 可 in 奇 could have been simplified from 馬. This is simply not possible. It's also not credible to me that 奇 derived its pronunciation from 可. So what is plausible?

Whether the meaning of 奇 is etymologically related at all to the true meaning of 大 + 丁 is unclear. I'm leaning towards no, simply because the first character creator of 奇, by finding it necessary to use 口, didn't consider such a relationship discernible. But various un-etymological meanings could still have been back-endowed onto the pictorial atom 大 + 丁, variously:

By the time it becomes 奇, with readings we can reconstruct, the following meanings were also evidently acquired:

The references do tell us with some certainty that 奇 was the original character for "mount a horse," so that gives further:

Some say this comes from the "surprising" appearance of mounted cavalry, given that horses were a late import, but more likely it's just a homophone.

There were evidently many other such suggestive loans, created at various times, and 奇 definitely acquired more and more meanings. The rest of the story seems clearer: Radicals were added to distinguish between the various homophones like:

etc. That the abstract meanings of "odd" (both "not paired" and "unusual") retained the non-radicalized 奇 is also consistent with common practice.

1 As another answer points out, this is a "fake" in that it did not come from a serious academic source. A source says it is found unattributed in the book 《汉字密码》 ("The secret code of Chinese characters") by the "alternative theory" author 唐汉. It's not clear if the entire character is made up, or it is simply given a made up semantic explanation. The answer assumes the character itself (or one substantially like it) is found somewhere in the Oracle Bone corpus, and proceeds from there.

I'm just learning Chinese, and by no means an expert. However, I did pick up a copy of Kalgren's dictionary and I have been using the internet to research the meanings behind characters to help me remember. I started with the very first one: 阿。 What is interesting about your question and my search to understand 阿, is that I found a similarity in the oracle bones. In the case of 阿, the left character is a simplified version of mound/large mound/continent. and the right is 可 which, the wiktionary gives (see picture below) the root characters it derived from. Notice the Etymology 1 description. It means to carry, lower back, perhaps kidney. Personally, I think it looks more like a stick with a bag on it like a drifter would carry around in cartoons. What is interesting to me is that in 阿, it is paired with the mound character and it is always used to describe a family member or a relationship. So, I think it means a relationship with ancestors (our ancestors moved to this land/we carry on of our ancestors/ancestral land). In addition, my oxford dictionary lists 阿飞 as a hooligan, and hooligans can be a little strange/crazy. The pictures you have shown look very similar to the oracle script for the carrying bag, and I can't help but make the connection that perhaps the word strange is trying to describe a crazy person/drifter (one who travels around with no home and is kind of nuts).

Not the answer you're looking for? Browse other questions tagged characters etymology glyph-origin or ask your own question.

3
Etymology of 奇 and 怪
2
Sound Loans in Chinese