Is there an old way of pronouncing 牠?

Is there an old way of pronouncing 牠? I remember learning to pronounce it as "tuo" when I was in primary school, which was more than 40 years ago. I know it is pronounced as "ta" now.

I think it's an old pronunciation. I remembered this pronunciation appeared in a classic poem composed approximately in Tang dynasty.

The note says the correct pronunciation is "tuo", which rhymes with "罗","多" and "么". According to the poem's pattern,"他" should rhyme here.

In modern usage, I don't sound "tuo" in any case. "ta" is the only correct pronunciation. In order to rhyme, I'll read some characters with old pronunciations when reading classic poems.

Such a phenomenon is called "古音异读" (lit. special ancient pronunciation), however, while the languages is evolving as time flies, some special pronunciations have been ignored by the public, and thus get lost.

Sometimes I'm still confused when reading these characters. A typical one is "骑", when I learned it in a famous verse "一骑红尘妃子笑", I was taught the correct pronunciation was "jì" which means "a rider on a horse"; however, now in the dictionary, the pronunciation for this meaning is also qí.

I can't find direct evidence and reference, but according to the book 字源谈趣, I think you're right. And for the further explanation: 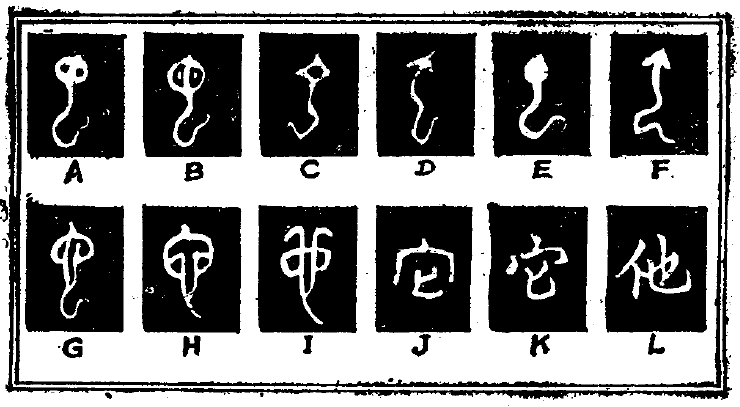 This is a picture about Chinese character evolution of "它". Its original meaning is "snake".

Not the answer you're looking for? Browse other questions tagged difference pronunciation pronouns or ask your own question.

11
How gender specific in writing is the character 他
3
“an” final pronunciation
3
What is the Old Chinese Pronunciation for the Character 兮?
2
What is the difference between 老X and X老 as a term of address?
3
Should I pronounce “er” as [ɚ] or [aɚ̯]?
5
In which pitches do I pronounce several first tones in a sequence?
1
Is there any specifically masculine character for 他
2
Pronunciation of 辆
1
Different accents/dialects applicable to the pinyin “r” sound