Seems like I'm not the only one confused about this, the country is coming up with slogans nobody understands.

Recently there have been a lot of signs put up with things like 中国前进 written on them, but the confusing part:

Yes,好棋 means "a good move"; either in chess-style games or, by analogy, anything related to a contest of strategy (e.g. 普京毁了一步好棋, "Putin screwed up a (previous) good move".)

The phrase in question, 中国好棋, is a bit different. That originated from this poster, where it is the title of a poem:

The character 好 has two meanings:

The latter meaning is the one intended in the phrase ``. So the phrase is saying "China likes chess" (or Go or generic board games). This can be inferred from the context provided by the poem, the visual emphasis on the 好 character, and also because a subject (中国) precedes it and an object 棋 follows it.

The other possible meaning for the phrase is something along the lines of a "Chinese good move". That doesn't fit the poster's context (though you can interpret it as a pun), but the phrase can be used with that meaning too. For instance, Chinese chess prodigy 侯逸凡 (Hou Yifan) has talked about the awakening Chinese dragon making a 中国好棋 on the chessboard of the world.

For reference, the poster: 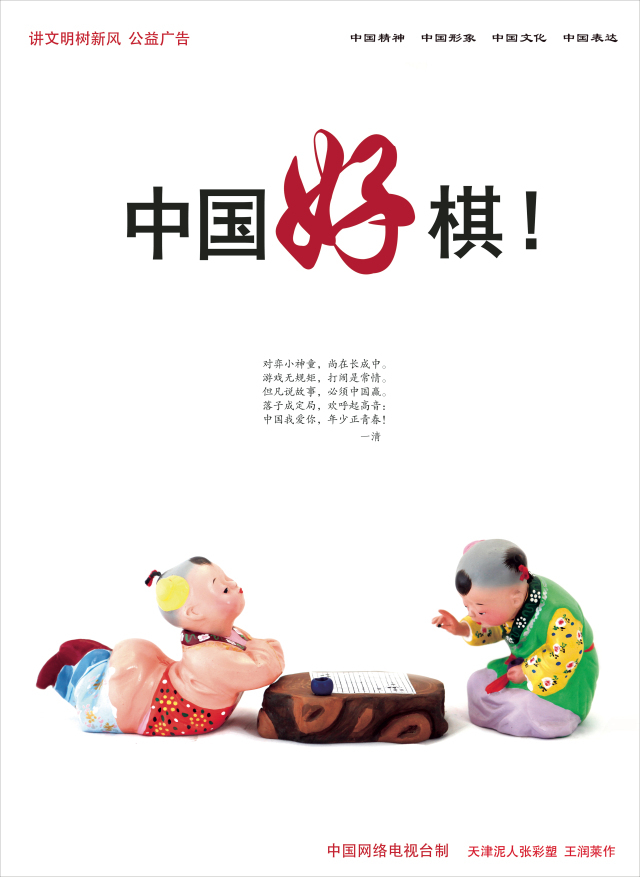 In that case, it means GOOD MOVE. 好棋(hao3qi2). If you see something like 他好棋, it should be read as (hao4qi2), which means HE IS INTO CHESS.

4
What is the meaning of 有针对性地
2
What is the English for “地宮”?
3
Does “女朋友” work for older couples?
1
For the character/word 煎, which of the English words “braise”, “pan fry”, “sauté” are the best way to think of it?
0
What does the phrase “说不好比起~” mean?
0
How would I translate “与君知”
1
比较你们国家和中国对颜色、数字的看法: How can I compare two country's opinions on “colors” and “numbers”?
0
- 古伦木! - 欧巴! Meaning in this context?
2
先进个人奖, what is this?
0
Does anyone know what this means or the origins of this artwork?