This question is regarding when 幺 appears in traditional Chinese.

What is the simplified variant of 幺?

I asked this question on the cantodict forums recently, and one member gave this excellent response:

I found over 20 words in ABC Comprehensive Chinese Dictionary where the traditional contained 幺 and the simplified form uses 么. This is a consistent mapping in that dictionary.

Therefore, it is part of the simplified script, but it was never simplified to begin with. It is a standard character. 说文 says: 小也。通俗文曰。不長曰幺。細小曰麼。許無麼字。象子初生之形。子初生，甚小也。俗謂一爲幺。亦謂晚生子爲幺。皆謂其小也。於堯切。二部。凡幺之屬皆从幺。

康熙字典 also describes this character, and adds at the very end: 俗作么

么 is therefore an 异体字 that seems to have been normalized within the traditional script, at least as it is used in Taiwan and other locations. It is also used in China, though, as in 么妹. 么 in China is of course the interrogative particles "me" or "ma" in its own right.

The character 幺 wasn't changed in the process of simplification. The picture below may help you understand the current relation between 麼, 麽, 幺 and 么 in light of their evolution. Note that grey nodes represent variant characters.

Historical character information is taken from 說文解字 (121) and 康熙字典 (1716). Modern data about Hong Kong are based on the Longman Advanced Chinese Dictionary (2003, available in Pleco), data about Taiwan are based on MOEDict (2016), created by the ROC Ministry of Education, and data about Mainland China are taken from the Table of General Standard Chinese Characters (通用规范汉字表) (2014), which is an official document describing simplification. 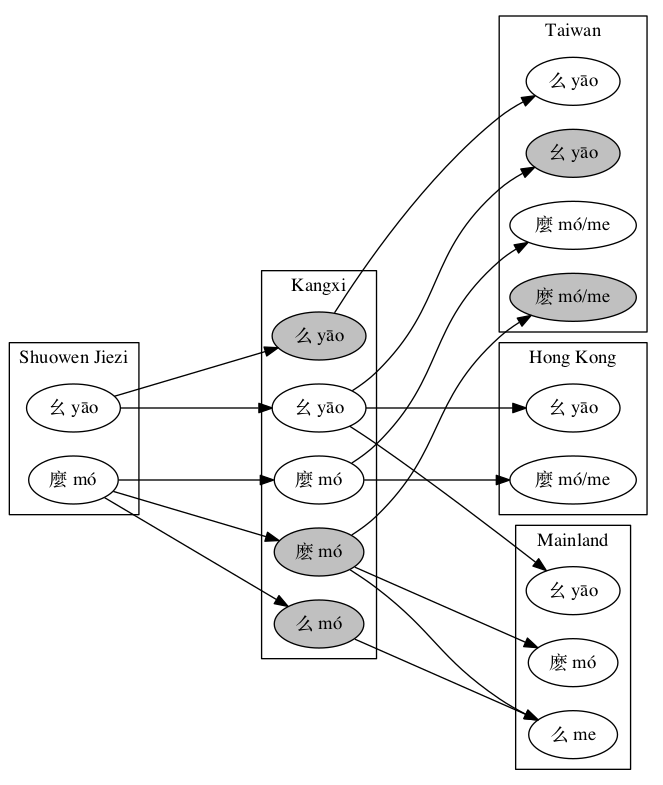