If Confucius came back to life today and scribbled a message, could most modern Chinese people understand it?

For example (and I am not sure if this is a good example), if presented the following stone inscription (石鼓文, source, c. 374 B.C.), could most modern Chinese people understand it (even vaguely)?

(This question inspired by this Skeptics.SE question.)

The biggest obstacle is the script; although simple characters are still understandable, the evolution of scripts from seal script (the closest script to modern ones during Confucius's time) involved drastic changes in the appearance of characters. Those unfamiliar with the changes would have a lot of trouble recognising the characters. The shift to simplified characters also adds to the difficulty. 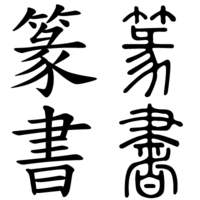 What if we shifted the goalposts and assume Confucius wrote in modern script (but using 文言文)?

This is because the education systems (PRC, Taiwan, HK, SG) do not seriously touch classical Chinese (文言文) until high school, and most Chinese have a middle school education or lower.

Having said that, it's not that 文言文 is completely incomprehensible to Chinese. Many people, even if they have not formally studied it, will have encountered limited examples of it through examples such as poetry, chengyu, and even in extra-curricular media (古装剧 - Chinese period dramas - are extremely popular). These often feature 文言文 or at least use some grammatical rules of 文言文. Therefore, most Chinese will be able to recognise the meanings of most phrases in 文言文, although whether that means they can fully understand an unfamiliar passage written in 文言文 is questionable.

If Cicero came back to life today and scribbled a message, could most modern French people understand it?

Well... that depends on how much Latin they studied. The case with modern Mandarin (henceforth MSM) speakers reading Classical Chinese is similar:

11
Reasons for Chinese changing from monosyllabic to disyllabic?
1
What are some profanity words in classical Chinese?
4
Is there strong evidence that Classical Chinese was ever spoken?
2
天干、地支、八卦和六十四卦 Heavenly Stems, Earthly Branches, 8 Trigrams and 64 Hexagrams
1
How can I put the understandability of classical Chinese and modern Chinese into scale?
4
Tang Dynasty Inscription
5
What did Eastern Han Chinese sound like?
4
Scribal convention versus scribal error
0
Are there published adaptations of the Analects in Modern Mandarin?