I have stumbled upon Zhang Shaolin's Hoi-nam kai-fan. I asked three translation questions about it: 1, 2 and 3. THere you find the lyrics and a link to a video, and my translation attempt. This question is to ask about the strange pronunciations that are present in some points of the song. Precisely:

Can someone give reasons for these facts? Is the final 你 a typo perhaps? And also, can someone provide me with tone marks (or tone numbers, and naturally an explanation of the contours) for the whole lyrics?

I had a second (tenth?) listen, and extracted the sound to an mp3. Then I put this through Praat. I noticed something interesting:

This is the first occurrence of 來, around 72 seconds in: 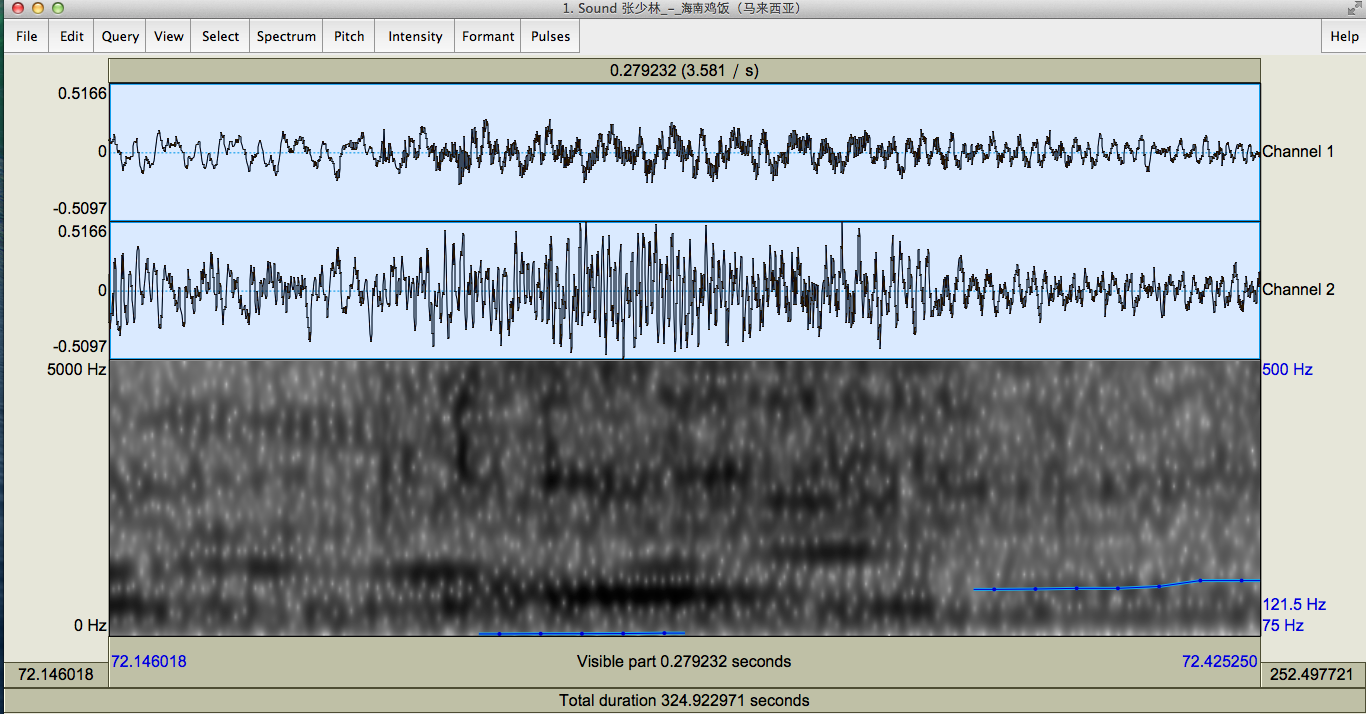 This is the second occurrence of 來, around 121 seconds in: 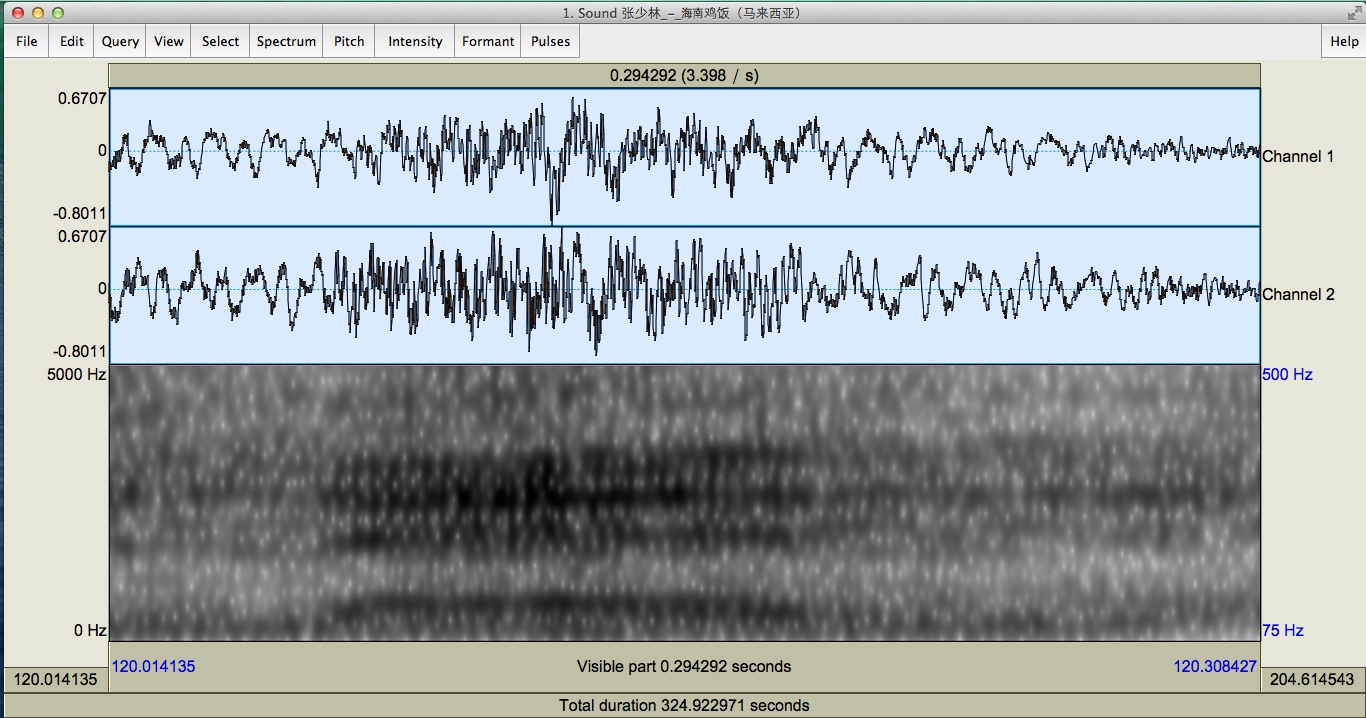 In this case it could be an influence from Cantonese -- Zhang is from Selangor -- where 嚟 is often pronounced lei.

Same around 2mn14 where 来 in 按好吃讲只只来帮衬 is [lei]. So it seems Zhang alternates freely loi and lei.

As for 歌 I had a look with Praat at only the first one (最近做歌星讲好难) -- it's getting late here :-) -- but this one is go1. I confirmed it by listening to it isolately, and looking at its sonogram -- it has the same profile as 近 and 讲). But listening to the full sentence it comes out a little weird, as if it were spirantized.

I'll have a deeper look tomorrow.

If you compare this sonogram with the second one, [lei], you see it's kind of similar -- the vowel is basically the same, except it doesn't weaken into [-i]. It's [e:]. 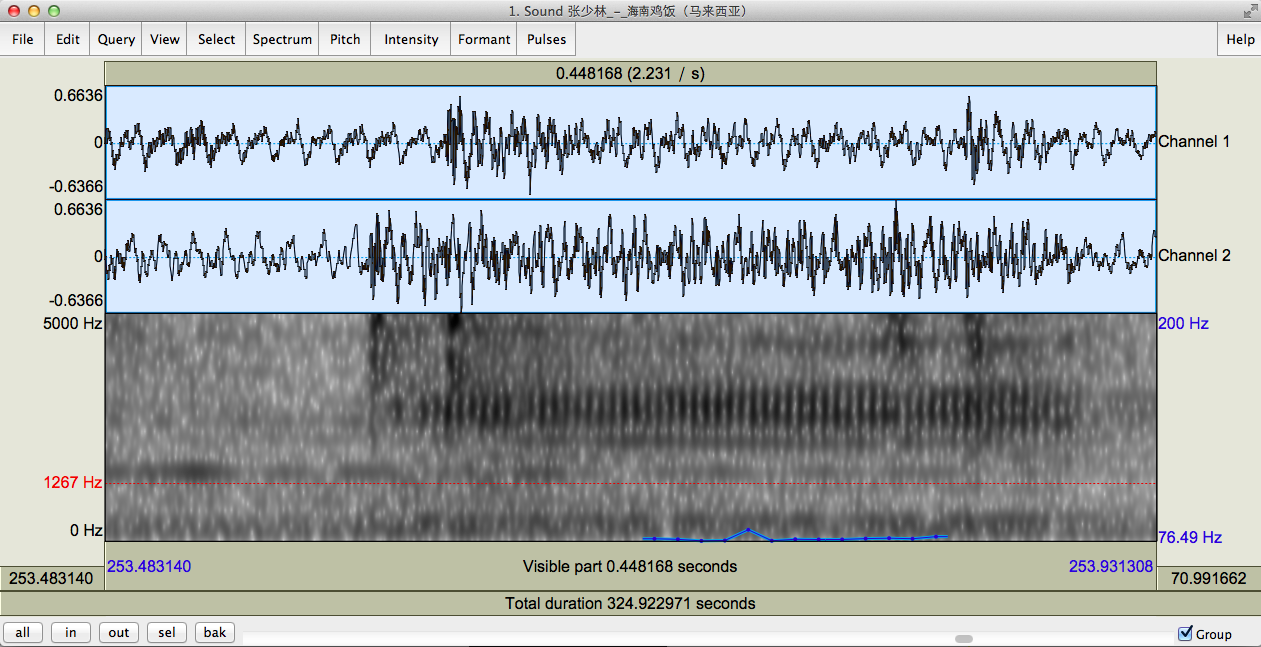 As for the initial. In the suspicious 你, look at the initial in the sonogram, and compare it with the sonograms of [loi] and [lei], especially the latter. You have very similar patterns, albeit weaker for 你. I believe Zhang kind of reverted to Cantonese [lei]. The [l-] is there but devoiced (the lower dark line at the beginning of [lei] is barely there). I believe it's a voiceless [l], that can be heard as a [h].

Regarding Hakka tones, I used Dr Lau's PinFaa data to build a dictionary, which I added into my own little online tool. The tone contours are from [this page]:

Not the answer you're looking for? Browse other questions tagged pronunciation topolect hakka or ask your own question.