What exactly does 意 mean?

If I'm not mistaken, this 300 BC Chinese philosophy is strikingly modern.

For example, until one sees the colour red, he will never know what the colour red is. No verbal explanation can take the place of a demonstration.

In another example, no one can learn how to swim by just reading a book.

I wonder what exactly 意 means.

Modern translation of colloquial saying considered to be 意义 here, which in english is meaning, sense, ignificance, importance, bearing or something else. But ancient words are very abstract, abbreviated, modern meanings can't mean the meaning itself.

To know the 意 of 意, maybe it is inappropriate to ask this question in the first place.

The closest synonym I could think of it's: spirit. which represent fundamental, basic or even simple truth underneath the hood.

"That's the spirit" people often say. And this word also means alcoholic beverage. Why exactly? I do not know but I do know if someone is asking this question he is not getting it, it he? :)

意 can generally mean idea, concept, meaning, thought, to think, wish, intention, will, to expect, to anticipate, etc. which is quite a lot!

Also, 意 is not usually used singly. It is most often used together with another word, which probably helps add depth to the actual meaning. For example: 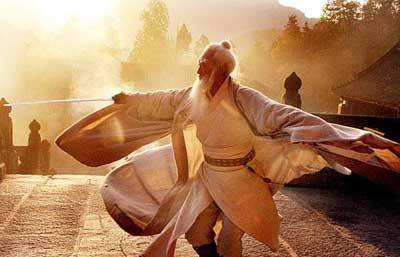 Being a 武侠迷, I can best relate "意" to the classic novel《倚天屠龙记》.

In a particular scene, a 100 year old martial arts expert 张三丰 was imparting his newly conceived, and interestingly slow-motioned swordplay 太极剑 to his grand disciple, 张无忌.

And the words below were exactly how "意" was used to illustrate the essence of 太极剑: