I always mix up their tones and/or meaning. Do you know a good mnemonic to differentiate the two?

Maybe there are compound words which contain either character which could help me?
I found 买卖 which I get right tone wise (mai3mai5) and meaning wise (buy and sell) mostly. So I can connect tone and meaning using that. But when writing I still don't know where the 十 goes.

You can use 买进 and 卖出 to reduce the chance of being misunderstood.

买,卖 and 借 are the most bewildering Chinese words in modern commerce. He who can coin some new words and popularize them will be our hero.

Here's an image shows the evolution of 賣/卖. 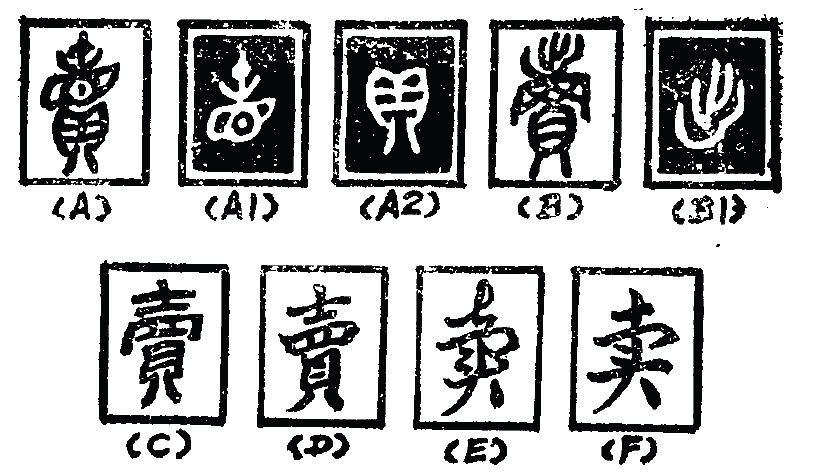 Pay attention to the picture (B), it appeared at the Qin dynasty, and take the 買/买 as its phonogram part, so 賣/卖 has the same pronunciation with 買/买, and take the word 出(out) at the top of the word, which means sell out sth to get money. And at Han dynasty, 出 became 士 (picture (C)), and then at Tang dynasty's cursive script(picture (E)), it was simplified as 卖 further, and at last 卖 is adopted as the simplified Chinese word of 賣.

Hope it can help you to remember the difference between 买 and 卖.

This is not true etymology but I remember that 卖 (mai4, sell) looks like it has 土 on top (tu3, earth), a person stamping on the ground to insist they must sell (with falling tone emphasis). Then 买 (mai3, buy) has more like a third tone mark over it for the customer hesitating "buy?"

I don't like to use a lot of stories like that but for this case of 卖/买 I do it.

Well, how about this as a mnemonic: "Sell something and get ten dollars." That might just help you remember the 十 goes on top of "sell".

When I was a child, I used the analogy below to memorize these two characters.

The only difference between them is "十", which pronounces Shi2, having the same pronunciation as 食. 食 can link to 食物, which means food.

In ancient times, sellers always wrote a circle or insert a grass on the things to indicate that are on sale.

You can remember this when you write next time: 卖 has the component 十, meaning seller have things to sell, but 买 has nothing, so he can only to buy something.

I hope this was helpful. :)

Maybe the 十 or 土 two on the top is the "caching!" dollar sign popping up in the eyes of the person selling something and making their profit.

I remember in this way.

3
Character difference between 'buy' and 'sell'

25
Techniques for learning and retaining characters
4
Learning abstract "tone contours" for words and phrases
2
Self-Teaching and Methods of Practice
2
Word list for computer UI and technical. (Simplified character, pinyin, English)
3
While learning Korean, is it a good idea to start learning Chinese in parallel?
1
Which memorization techniques are useful for remembering characters?
0
I have Chinese text in an image, I'm looking for a translation please