How were Chinese characters taught to Chinese children before the introduction of pinyin?

Before schools started to use pinyin for teaching characters to Chinese children, how and/or what was used to teach it instead? And what about how dictionaries showed the pronunciation of characters?

In the (very) old days, there was a system called 反切 (in English) where two characters were used, one for initial, one for the rhyme (vowel[s] + final), followed by 切 to indicate it was a phonetic notation. For instance, 東 could be represented as 德紅切.

I thought I should insert an example from the canon of Chinese dictionaries, 康熙字典. Here's page 1 -- might as well start at the beginning... 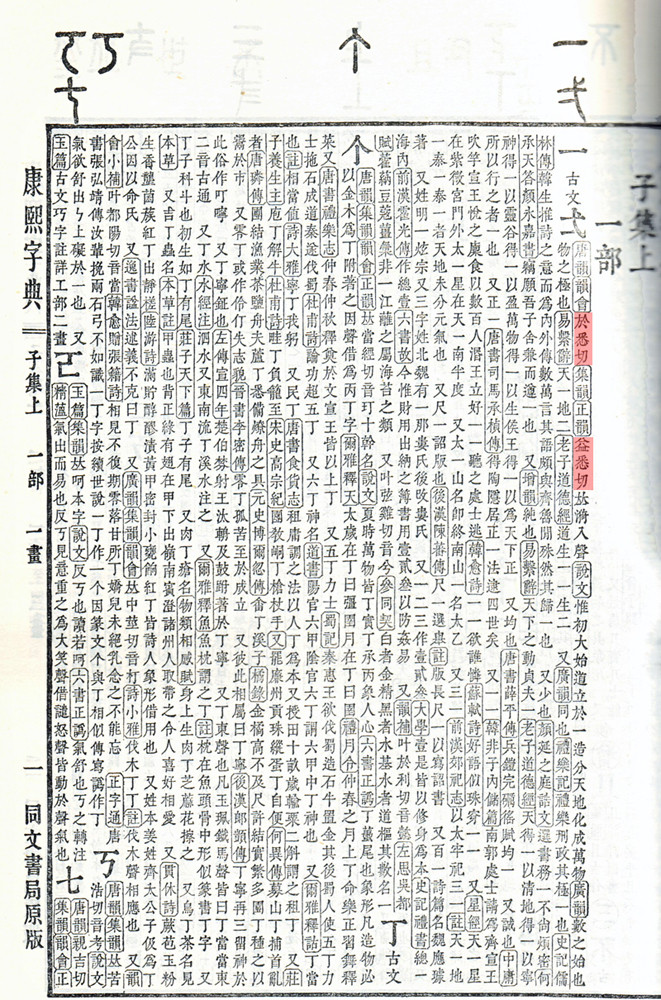 I highlighted the two definitions for 一: 於悉 for 唐韻 and 韻會, 益悉 for 集韻 and 正韻. Which is interesting, as these won't match the modern pronunciation in most dialects (strangely enough 於悉切 works perfectly in Hakka for 一 but that's probably more likely an accident...).

From Wikipedia, before Hanyu Pinyin was introduced, the PRC Chinese learnt Bopomofo or 注音符號 [Zhùyīn fúhào]. It comprises of 37 characters (注音) and four tone marks (符號).

There are a variety of ways to look up a word in the dictionary such as 部首查字法 and 数笔画查字法. This article describes the various method.

As for the question how characters are taught, one important point that all other good answers mentioning 反切 fail to elaborate, though they really give a brief & clear introduction to the traditional academic way of showing character pronunciation in dictionaries, is that when we are talking about "before the introduction of pinyin", a nationwide standard Chinese (e.g. 國語 Guoyu, 普通話 Putonghua or so) might have nor been popularized. What does this mean? Actually in the old days, as told by my 外公 Waigong, a native speaker of 贛語 Ganyu born in the 1930s, in any 私塾 Sishu, for a long period the only type of institution that served for elementary education before the introduction of western-style schools, all characters were pronounced by the 先生 Xiansheng in their dialectal versions. And kids generally recited the fundamental materials such as 《三字經》 Sanzi Jing 《百家姓》 Baijia Xing 《千字文》 Qianzi Wen by imitating their 先生 without deeper understanding, till they could fully handle the mapping between the characters and their pronunciations. In such process, no auxiliary tools for phonetic indication were used, nor were a unified one even possible, due to the huge differences between dialects.

And I shall say, from the viewpoint of a native speaker of 普通話 Putonghua, who has learned it through school education since young, 反切 could hardly have been used as a practical tool to teach young children the pronunciation of characters, since occasionally it uses more complex characters to explain simpler ones. Plus, the practice of combining syllabic characters rather than juxtaposing phoneme symbols itself shows the restriction of old Chinese scholars' understanding of the relation between syllable and phoneme, not to mention how young kids should use this imperfect tool to learn "hard" characters from scratch.

P.S. apart from 反切 which indicates a syllable in whole, from my vague memory, there might also be a tone-indicating symbol system called 四聲破讀記號 Sisheng Podu Jihao or something similar in ancient literatures, which puts a small circle in one of the four corners of a character, so as to indicate whether its tone is 平 Ping, 上 Shang, 去 Qu, or 入 Ru of the traditional tonal system. But unfortunately I can hardly find a reference for this. Anyone who can provide further information would be highly appreciated ^_^.

Actually the comparison between the IPA and pinyin is misleading in another way. In IPA the pronunciation of the letters remains constant... in pinyin, the pronunciation of certain letters changes according to preceding letters - namely - i after q is different to the i after c.

Plus iu in qiu is not what one would expect from an IPA. Same for -un ending.

It always amazes me that pinyin was invented in 1949 or thereabouts and they still couldn't invent a romanisation without strange exceptions.

I personally believe Pinyin is only for non-native speakers or is only to set up a kind of standard prounciation system for Chinese language.

Below are the facts:

1) Chinese children are taught how to write some special Chinese character with the already known prounciation immediately (so children don't have to learn the Pinyin first. As a native speaker of Chinese, I even didnot know why Pinyin was taught before high school :) Native speakers learn how to pronounce first, and then learn how to write; this should be the truth;

2) The modern Chinese Pinyin system (or scheme?) is only for Mandarin (or Putonghua, which is based on Northern China's Peiking/Beijing dialects). So most of the aged Chinese people in south China who were educated with only their own dialects even cannot pronounce Pinyin correctly. One of the most popular Chinese character IME software is based on Pinyin, but I know a lot southern China people who cannot use such IME software but a more complicate to learn Wubi IME software.

Not the answer you're looking for? Browse other questions tagged pinyin history or ask your own question.

11
How did Chinese people know in the past the pronunciation of words?
3
How is pronunciation discussed in Chinese?
2
Is knowing how Chinese Characters are formed common knowledge?
3
What were the tools that Chinese teachers could use in China before the introduction of Zhuyin and Pinyn

12
Why were some letters like Q, X, C, chosen for Pinyin which confuse non-Chinese speakers?
3
What's the Eye of a Hurricane called in Chinese/Pinyin?
6
Teaching Pinyin and Characters together vs Teaching Pinyin then Characters
4
What is the Socio-linguistic Function of Mixing Pinyin and Characters Together By Adult Native Chinese Writers?
3
Pinyin to Chinese characters
8
How to write characters containing the ǚ pinyin symbol in most common Chinese Input Methods?
3
Need an API to convert Pinyin to Simplified Chinese characters
0
If Pinyin (or Other Romanization) can be Translated Back into Chinese Characters
3
On Linux, how do I output Chinese Characters (not pinyin) using tones in the input
2
How common is the character 唷 (pinyin: yō) in Mandarin?