What's the state of Chinese classical texts in the mainland after Simplified Chinese (and the Cultural Revolution)?

But what about other formative texts in Chinese culture, such as Daoist and Confucianist? Or even Buddhist canons, since I'm not aware of one that was completely converted to simplified Chinese.

What kind of projects are there to preserve these texts in the modern script? Published books, websites..? Either by the government or private companies.

Are classic texts still teached in schools the same way they were before the introduction of today's simplified characters and the cultural revolution? Do they use traditional characters at all? How does one go about studying the classics nowadays?

Only textbooks, texts published by government and other formal texts, e.g. Company name registered are forced to be in SC. In other circumstance, TC or SC are just an economical problem.

For example, if you wrote a book, if you can make the publisher believe the TC edition will be sold more than SC, then you can publish the TC edition.

There are many people like to read classical texts in traditional.

Here is the fist page of amazon.cn when you search '繁体版'(traditional edition),

The first is Daoist, the 3rd is Chuang Tzu, they are all traditional and vertical. 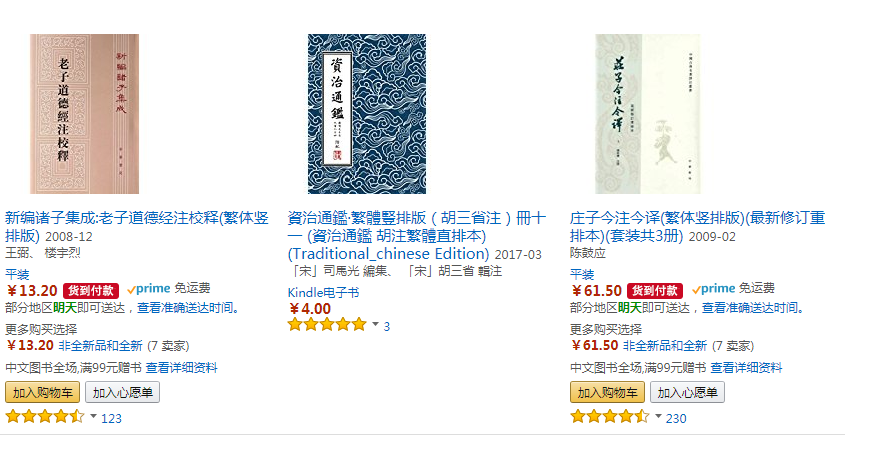 When you in school, you will study the SC edition. And allmost all young people can read TC, because you will meet TC texts in TV, games, books, everywhere in your life.

So don't worry this problem.

I would like to answer your questions one by one at first, but I decide to give you a comprehensive answer here. I'll take Buddhism for example. Daoism and Confucianism (NOT a religion) are similar.
Buddhism are still publishing books in Traditional Chinese (TC). In fact, you can find both Traditional Chinese and Simplified Chinese (SC) versions of books existing in China. It is a widespread opinion that reading books in TC will be more beneficial than Simplified Chinese (SC), since TC is the script used back to the foundation of the two religions. Similarly, if someone believes Tibetan Buddhism, many lamas will require him to chant in Tibetan language. Such phenomenon is still common.
However, most experienced and renowned religious leaders (such as Master Jingkong and Dzongsar Rinpoche) are against such unnecessary restriction. Their opinions are: Since most Chinese now are taught SC, and religions should benefit as many people as possible, it's best to publish books and scriptures in SC, the most popular script in China. It should also be allowed to chant in Chinese language instead of Tibetan or Sanskrit, as it will make no difference except that Chinese people will find chanting much easier.
Traditional Chinese script is not taught in today's schools and universities in China, except for Chinese language major. However, it's not a big problem for the majority of Chinese to read TC due to the influence of Taiwan and Hong Kong(but most of them can't write it). For classical Chinese texts, they are still taught from primary school through high school, but they are all written in SC.
For Buddhism classics in Simplified Chinese, please visit:
http://www.fodian.net/index1.htm
This website cooperates with CBETA in Taiwan, which publishes corrected version of Buddhism classics.
You can leave a comment below if you have any remaining questions. Don't forget to give me an upvote or accept this answer if you find it useful.

are classic texts still teached in schools the same way they were before?

classical texts are still taught in schools nowadays. well, "before", you mean last century, "before 1911", or hundreds / thousands of years ago?

do they use traditional characters at all?

what kind of projects are there to preserve these texts

a few websites have classical texts "collected", in traditional chinese such as:

i'm not sure if this one is a "complete" buddhism text collection, well, it should be the largest.

currently, it's the best sources for classical text, it included 四庫全書 and more. further, it put buddhism texts & taoism texts into separate categories; ought to be easier to find.

this one had the cadal (china-america digital academic library), which had 78K+ books in classical text. unfortunately, the "books provider" made many unforgivable errors, that the meta-data for these books are, far from perfect :(

second to last, as i know, the simplified chinese should be used for modern text only; all texts from the past (literatures of yore) should be use traditional chinese characters.

buddhism to propagate once again

are you kidding? or, a evil cult (邪教), pretending it's buddhism?

Whenever something is newly published, it is usually in Simplified. That's probably just it. If something is in Traditional because it was made / written before Simplified was popularized, well the copies, if they exist, are just kept.

If this is what you are wondering: it is not hard at all to convert Traditional to Simplified, especially for a human. If people want to publish something now, they typically type. Now, how do they type? They look at the original and essentially digitalize it. It is just that they probably usually just type in Simplified because that is how they have their input method configured. Thus a text body in Traditional is digitalized in Simplified seamlessly.

Not the answer you're looking for? Browse other questions tagged classical-chinese traditional-vs-simplified or ask your own question.